Ti Top Island from a distance Got its name from Ghermann Titov, a former Soviet Union hero in the second World War , Ti Top Island displays a beach shaped like a crescent moon and sand that has been washed to a snowy white by the tide.It near by Amazing cave halong bay

Titop island ? Why ? This is an interesting historical story in 1962, the emty island whic had the new name of astronaut Ghermann Titov, a hero of the former Soviet Union. At this time Vietnam war still booming between the North and the South of Vietnam. The North followed big support Soviet Union and the South followed American. The people in the North had a big ambition to finished the Civil War …to help Vietnam became only one coutry…The North have very good relationship with So Viet Union….that why accompanied by President Ho Chi Minh the beautiful island had a new name when Ghermann Titov visited Halong Bay. To perpetuate the remembrance of their visit, Uncle Ho named the place Ti Top Island. And now Vietnam with open door policy and tourism is growth up very fast in Vietnam Titov island become an attractive beach for tourists and has various of tourist services. After 30 years when the island had a new name, Titov came back to Vietnam and visited Halong in 1997. With happy feeling he wrote in the souvenir book of the Management Board of Halong Bay: “My deepest thanks to destiny, which has allowed me to come back to this tiny island.” It has become a beach attracting many visitors.

Titov island, an attractive island in the world The island was located far from around 14 km east from Bai Chay Wharf, Ti Top Beach takes the shape of a crescent encompassing the island. Small though it might be, it wins kudos for its quiet and airy atmosphere, as well as its alluring landscape. The beach boasts pristine white sand, clear and blue water and small waves, which make it ideal for recreational activities like swimming and other sea sports. At present, there has a Ti Top small beach.

There is a bar in the island which also provides swimming costumes, floats and lukewarm shower. Fresh water was carried to the island from inland. Swimming at Ti Top Beach is really enjoyable. After swimming, you can enjoy fresh sea food specialities in an ideal environment of immense sky and sunshine. This beach is very beautiful and is well worth a visit to cool off when the heats starts to get to you. If you spend a day at the beach and elect to take a deckchair, you will be asked to buy either a baguette, some lovely pineapple or a drink, otherwise you will have to pay for the seat. During the full moon, you are able to wander around until late at night. 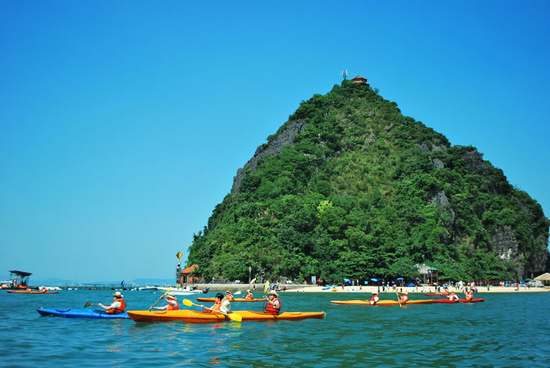 The island has become a popular tourist destination. On summer holidays, the famous beach of Ti Top Island cools off visitors heading to Quang Ninh Province and you will surely have a chance to join in an interesting journey to the natural wonder